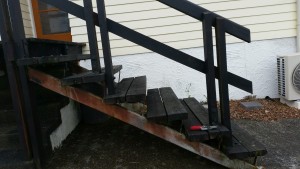 While I was playing with my one-year-old girl at our backyard an old man was sitting on the first staircase from the bottom waiving and saying “Hi” to us. I replied with a wave and “Hi” with a thumbs up asked him if he was okay. I continued watching my baby while she was playing but then I heard the old man greeted us again and I responded the same. On the third time, he did the same but he added some words “I need help, I can’t stand!” I said Oh! And repeated what he said. Obviously I was panicked. I don’t know what to do plus I was taking care of a toddler. I was thinking to knock at neighbour’s door but then I realised the one left in our next door is also a woman and has a little baby. Should I call 111? I even thought of refusing and reason out that I have a baby to look after.

I didn’t refuse. I didn’t call the Emergency number but instead I went inside the house and asked my eldest daughter to take care of her sister and play outside.
I decided to help the old man and jumped over this fence to get into his place. 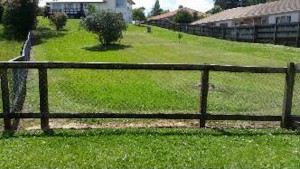 I didn’t know what to do when I arrived there. I asked him “Should I call 111?” He refused, he said let’s try first and if we can’t that’s the time we’ll call. I just need to stand up, he said.
It was so hard for him to stand up because he has braces on his legs and his crutches were on his side. He needs someone to support him. I did by just following his instructions – not that easy even if it was just lifting his legs one at a time on each staircase. I was scared he might fall down. Scared that he might not be able to make it with my support. Scared on what will happen to him and I would blame myself of helping him instead of calling 111. It was pretty scary for me and I could feel my muscles were shaking.

When he finally reached the last step, we were both relieved. He thanked me a lot and touched my face. I felt I wanna cry – it was amazing. I see him as my father or maybe a grandfather.
I learnt he’s staying alone and a cleaner comes to his house regularly. I learnt that he prepares his food, drive for grocery. He has a wheelchair but on that instance he did not use it because he was gardening. Maybe he managed to sit down to take rest and could not manage to stand up again.

It was a nice feeling to help somebody even if you’re scared and worried of the outcome. I felt this way maybe because I was thinking of myself but when I was holding him, I let go of my fear and focused on reaching the goal.

This was really a big deal for me and it felt great! I salute to my sisters out there, my relatives and to all who are taking care of the elders, may it be for a living or not. Now I understand how hard it is. Of course, I do because I had muscle pain for two days!

Sometimes we underestimate ourselves of what we can do to help others even in its simplest way. Sometimes we even refuse to reach out and offer some help. But sometimes, we will be called to ignite the kindness within us. To remind us that somebody needs us and someday we may need them as well.

How about you? Have you been called to share the kindness within you?

2 Replies to “A Random Act Of Kindness”